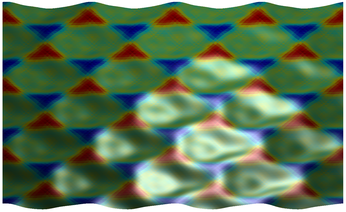 Elastic materials that have a small thickness can be useful as mathematical models of industrial components, biological tissues, nanoscale sheets like graphene, and in many other applications. Their thinness means that they are simpler to model than fully three-dimensional objects, but in turn their ability to sustain large deflections leads to mathematically interesting behaviour. Thin elastic bodies which are completely flat in their rest state are known as elastic plates, while correspondingly curved thin sheets are known as shells. Each type of object is found extensively in industrial applications, and the fast-growing recent research into atomic carbon sheets like graphene (an elastic plate) and carbon nanotubes (an elastic shell) has reiterated the importance of the underlying mathematical theory.

The thinness of elastic plates and shells allows the underlying mathematical equations to be greatly simplified. In particular, the complex deformations of a typical three-dimensional object are decomposed into just two fields: stretching and bending. This simplification allows us to model phenomena that are difficult to capture using the full elastic equations. One example is the loss of elastic stability, or buckling. This is a very important topic for industrial applications, since the shape changes caused by buckling can lead to loss of function or, in extreme cases, catastrophic failure. In certain cases, loss of stability appears as wrinkling or rippling, which occur in very thin structures, or under the influence of an attached substrate.

In many applications, the deformation of plates and shells is coupled with other physical phenomena. A canonical example is temperature: a bimetallic strip bends in response to elevated temperatures, due to the differing thermal expansion coefficients in the component metals. Analogously, biological materials experience growth fields, and thus the shape of biological structures like leaves and petals can be analysed as a bending in response to differing volumetric growth fields. Exotic materials like graphene exhibit different coupling effects. Not only are they strongly adherent to substrates due to interatomic forces, but strain fields in the material can alter the electronic transport properties of the material, leading to the intriguing possibility of straintronics, where electronic components can be created by applying specific strain fields to the sheet.