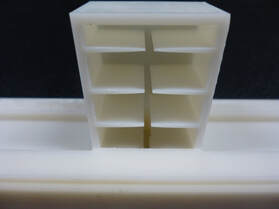 Metamaterials are composite materials with bulk properties determined by their microstructure rather than their composition. They can be designed to have quite remarkable properties. This enables manipulation of waves in ways that have not been achieved with standard, or natural materials. Metamaterials are normally composed of a host material with periodic arrays of inclusions with alternative material properties. The inclusions can be solid scatterers or can be locally resonant structures themselves.  The image on the right illustrates the cross-section of an array of elliptical inclusions embedded in a sidebranch resonator and was part of a collaboration with Dyson technology that led to our 2018 APL paper (see below). This microstructure was designed to half the resonance meaning that the sidebranch resonates at one-eighth of the wavelength instead of one-quarter of the wavelength. This has the potential for significant applications in space-saving attenuation mechanisms in a number of products and sectors.

It is possible to realise other specific required material parameters by adjusting the microstructure of a metamaterial, such as the period or shape of the inclusions. These features of acoustic metamaterials mean that they are of great interest in many different applications.

Another application is that of "cloaking". One mechanism for this is to surround an object with a specifically designed metamaterial that can manipulate the path of propagation of incident waves to travel around the object. This means that there is no scattering by the central object, and so the object becomes acoustically invisible.

Another mechanism for cloaking is to employ materials that are deformable, or pre-stressed. The figure above, taken from our 2018 JASA paper, illustrates what happens when a so-called antiplane elastic (or "SH") wave polarise out of the plane is incident on a traction-free boundary of a half-space. One can show that if the medium is neo-Hookean and the boundary is perturbed due to an in-plane forcing, there is no change in the scattered field. This is a remarkable property of the invariant nature of neo-Hookean materials to pre-stress when subsequent SH waves pass through the medium. The medium above can therefore be thought of as a "ground cloak" in the sense that something could be placed in the gap made by the perturbation.

The theory of multiple scattering is employed in order to understand how a wave (of any type) scatters from multiple objects such as particles in the atmosphere, fog, objects in the ocean, inhomogeneities or defects in composites or emulsions, etc. See the animation on the right (Credit Artur Gower, University of Sheffield). The applications are broad and varied. In particular of critical importance is the ability of a theory to predict the so-called effective wavenumber of the wave when it propagates through an inhomogeneous medium. From this and/or the effective reflection and transmission coefficients the effective properties of the medium can be determined. Of course in general these are frequency dependent and also depend strongly on the volume fraction and type of scatterers comprising the medium. Since the early 1940s a mass of theory has been developed based on ensemble averaging. Our work has in the main focused on the efficacy of this theory and illustrating in particular the influence of boundaries on this effective wavenumber, or as we have shown that should be wavenumbers, i.e. more than one effective wavenumber can be shown to exist in the vicinity of the effective interface in general and in some special cases more then one wave can propagate some way into the inhomogeneous medium. The choice of such microstructures can have a profound effect on the macroscopic properties of such materials and there is a significant opportunity in order to exploit such random microstructures in metamaterial technologies.  ​
Phononic media

Phononic media are materials that consist of periodic arrays of inclusions or voids, the arrangement of which allows one to stop wave propagation at specific ranges of frequencies through materials via Bragg refraction and wave interference effects. Original work focused on photonics associated with light and other frequencies of electromagnetic waves. Since the 1990s however there has been a significant amount of work since there are clear applications in the area of sound, elastic waves and more recently in the area of manipulating heat flux. We have worked to develop new mathematical techniques that can help to predict the band gap structure of such periodic materials and we have also theoretically determined new material microstructures that can be deformed in order to manipulate the band gap structure. We also develop microstructures that are invariant, or almost-invariant to deformation.