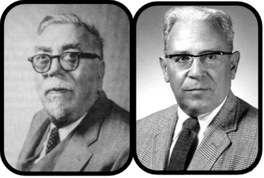 Wiener and Hopf
An important part of our work in the mathematical study of waves relies heavily on deep results in Complex analysis. In particular, we have a strong expertise in the so-called Wiener-Hopf technique. This technique, first developed to tackle integral equations [1], has been adapted by Copson [2] and Jones [3] to tackle boundary value problems directly. It is very powerful and has been really successful for analytically solving canonical problems for a broad range of applications: acoustics, electromagnetism, elasticity, water-waves, Stokes flows, heat equation, etc. It is traditionally associated to two-dimensional problems and involves functions of one complex variable. The archetypical example of the power of this technique is the resolution of the Sommerfeld half-plane diffraction problem [4]. A brief historical perspective is given by Lawrie & Abrahams in [5].

The essence of the technique consists in using the Fourier (or Laplace) transform to pass from a Boundary value problem (PDE + boundary conditions) in the physical space into a functional equation in the complex Fourier space (\(\alpha\) say). Such a functional equation normally takes the form:
$$\begin{equation} K(\alpha)\Phi_+(\alpha) = \Phi_-(\alpha) +F(\alpha), \label{eq:functional}\end{equation}$$
where \(K\) is a known (most often algebraic) function traditionally called the kernel and \(F\) is a known forcing that usually only contains simple poles. In our context, the two unknown functions of the problem, \(\Phi_+\) and \(\Phi_-\), are the transforms of the unknown wave field. It is however, normally known that \(\Phi_+\) is analytic in the upper-half \(\alpha\) complex plane, while \(\Phi_-\) is analytic in the lower-half plane. The kernel \(K\) is analytic on the intersection between these two half planes.

Often the kernel has a complicated singularity structure, involving branch points, poles, etc. One of the key aspects of the method is to be able to write \(K(\alpha)=K_+(\alpha) K_-(\alpha)\), where \(K_+\) is analytic in the upper half \(\alpha\) complex plane and \(K_-\) is analytic in the lower half plane. This is called a factorisation of the kernel.

Another step of a similar nature can be done involving the concept of a sum-split. For example, \(G(\alpha)=G_+(\alpha)+G_-(\alpha)\) where \(G_+\) is analytic in the upper half \(\alpha\) complex plane and \(G_-\) is analytic in the lower half plane. We finish with the use of Liouville's theorem after noting the boundedness of the individual terms. The end result gives us an exact expression for \(\Phi_+\) and \(\Phi_-\).

The physical field can be recovered directly via inverse Fourier transform, i.e. a typical complex contour integral. The deformation of contour integration is allowed under certain hypotheses, and choosing the right deformation for optimal evaluation is also a very interesting research topic that we are involved in.

​The application of the Wiener-Hopf technique necessitates a very good understanding of functions of one complex variable and their possible features (poles, branch points, branch cuts, etc). Visualising complex functions is not necessarily straightforward. If one is interested in the location at type of singularities of a function, a simple visualisation tool, called phase portrait can be used (see P is for Phase Portrait). On such plots, branch cuts are colour discontinuities, and poles and zeroes can also be easily distinguished. Figure 1 is a phase plot visualisation of the factorisation of the kernel, \(K(\alpha)=\sqrt{k^2-\alpha^2}\), which arises for the Sommerfeld half-plane diffraction problem (among others).

Figure 1: Phase portraits showing the factorisation of the kernel \(K(\alpha)=\sqrt{k^2-\alpha^2}\).

For periodic scattering problems such as the semi-infinite array, a variation of the Wiener-Hopf technique is still a very powerful tool. This variation is known as the discrete Wiener-Hopf technique [6,7]. The procedure is mostly unchanged but does have a few notable differences. One of these key differences is the transform used to produce the functional equation, which is the \(Z\)-transform instead of Fourier or Laplace. The resulting functional equation takes the same form as \((\ref{eq:functional})\), but this time, the analytic regions of the unknown functions, \(\Phi_+\) and \(\Phi_-\), are inside and outside the unit circle of the \(z\) complex plane given by \(|z|=1\).

In the semi-infinite array scattering problem, the kernel \(K(z)\) is an infinite sum of first kind Hankel functions at zeroth order,
$$\begin{equation}K(z)=H^{(1)}_0(ka)+\sum_{n=1}^\infty (z^n+z^{-n})H^{(1)}_0(ksn), \label{eq:DWHkernel}\end{equation}$$
which only converges on the unit circle \(|z|=1\). There are various methods that can be employed to accelerate the convergence of \((\ref{eq:DWHkernel})\) and alternative formulae that analytically continue it further than the unit circle. We can also approximate the kernel as a rational function using highly effective algorithms, such as "AAA" of Chebfun, which results in a highly accurate approximation that makes the kernel factorisation step of the Wiener-Hopf technique trivial. Figure 2 displays the approximation and factorisation of the kernel \((\ref{eq:DWHkernel})\). 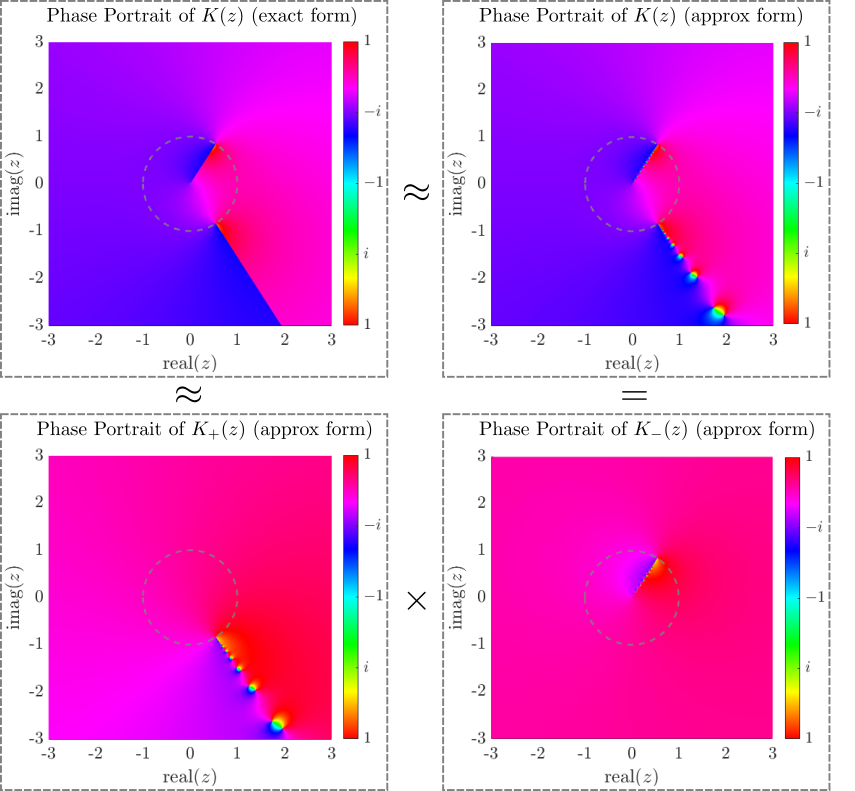 Figure 2: Phase portraits showing the discrete Wiener-Hopf kernel with its rational approximation and the approximate factors. Here the grey dashed circle is the unit circle \(|z|=1\).

For "simple" diffraction problems involving one infinite scatterer, both the kernel, the unknowns and the forcing in \((\ref{eq:functional})\) are scalar functions. However when multiple scatterers are present, or when scatterers have finite length, the kernel becomes a matrix and the forcing and unknowns are vectors. In this situation, the factorisation (though possible in principle) becomes much more complicated to do in practice and remains an ongoing theoretical challenge [8,9].

Towards a multidimensional Wiener-Hopf Technique?

Generalising the Wiener-Hopf technique to three-dimensional physical problems would be a tremendous achievement in diffraction theory. However, this is far from being straight-forward. One of the reasons is that it involves functions that depend on more than one complex variable, such as functions on \(\mathbb{C}^2\) or on \(\mathbb{C}^3\) for example, that are 4 and 6 dimensional spaces respectively.

For three-dimensional problems, such as the quarter-plane problem (the direct 3D extension of the Sommerfeld problem), boundary value problems can also be recast as a functional equation of the form  \((\ref{eq:functional})\), but this time, the functions involved are functions of several complex variables, and their domain of analyticity can be written in terms of products of upper-half and lower-half complex planes.

In this situation, the singularities of the functions (very important for the Wiener-Hopf technique as we have seen above) are not isolated points anymore, but become more complicated geometrical objects. In \(\mathbb{C}^2\) for example, a pole or a branch are unbounded objects of real dimension 2 embedded in dimension 4.

We are currently doing a lot of work on this topic [10-14]. In fact, a few lectures were given jointly by Raphael Assier and his collaborator Andrey Shanin on these specific topics as part of a 2019 Newton Institute programme. These are aimed at applied mathematicians, familiar with one-dimensional complex analysis, but keen to know more about the challenges of multidimensional complex analysis. Here are the links:
Lecture 1 | Lecture 2 | Lecture 3 | Lecture 4 | Lecture 5
If you don't like the chalk and talk approach, a three-lecture series condensing our recent results in applied multidimensional analysis has been given in 2021 by Raphael Assier as part of a American Mathematical Society Mathematical Research Community (MRC) hosted by Harvard University:
MRC Lecture 1 | MRC Lecture 2 | MRC Lecture 3 |