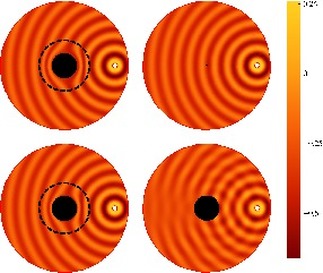 Cloaking of antiplane shear waves.
Polymer-based composite materials are commonly used in underwater engineering applications. The ocean exerts great pressures on these materials leading to inhomogeneous stress fields local to the inhomogeneities present in the composites. Since these materials are often used for sound-reduction purposes, it is of interest to understand how this pre-stress affects the propagation and scattering of elastic waves.

Pre-stress can have a considerable effect on a material's properties, both inducing anisotropy, and potentially affecting the material's density. This causes a wave's speed to vary both with location and direction, thus making the resulting governing equations considerably challenging to solve. In order to investigate the effect of pre-stress on elastic wave propagation, we have studied several canonical problems.

Pre-stress has also been utilised to create cloaks, in order to prevent the detection of a cylindrical cavity. It has also been used to tune the band gaps of phononic media, or alternately one can show that with specially chosen materials these band gaps are invariant or closely invariant to pre-stress. This is an important result for applications.