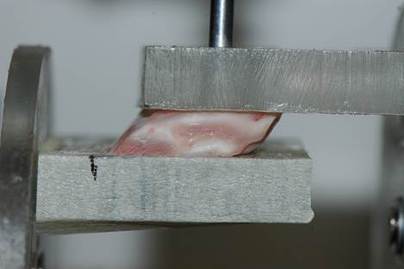 Nonlinear elasticity is the subject that deals with materials that are capable of large, reversible deformations. Of specific importance are deformations of polymeric composites, elastomers and soft tissues. Of course, in reality, no deformations are perfectly reversible - this is an approximation and we are required to incorporate lossy effects such as viscoelasticity.  Nonlinear elasticity and viscoelasticity are very active areas of research in the group, both in terms of the mathematical apparatus and the application of the theory to problems in the applied sciences.

The picture to the right shows porcine brain matter under simple shear, illustrating the large deformations possible in soft tissues. Thanks to our good friend Michel Destrade (NUI Galway) for this nice image taken from his paper entitled "Extreme softness of brain matter in simple shear" which was published in the International Journal of Non-linear Mechanics.

Within the MWM group, we are interested in the fundamental theory underlying nonlinear viscoelasticity. In 2014 we reformulated the quasilinear theory of viscoelasticity originally proposed by Fung. Although this theory does have its limitations, it does have merits and some of the recent criticisms in the literature are, in fact, unfounded, as we showed in our 2014 Proceedings A paper. We also then extended this to the context of transversely isotropic materials. Our work on biological tissues has tried to ascertain the correct form of strain energy functions for the hyperelastic behaviour of tendons and ligaments. We have also developed homogenization techniques in order to predict the associated effective nonlinear viscoelastic behaviour. This incorporates strain dependent relaxation via "fibril recruitment".  Finally we have done significant work on the ability of nonlinear elasticity to provide a tuning mechanism to waves propagation. In particular we showed that certain nonlinear elastic materials have an invariance property which means that they have the ability to act as natural cloaks under pre-stress. See our metamaterials page and waves in pre-stressed media page for further information.          "Grasping with a soft glove: intrinsic impedance control in pneumatic actuators"
Journal of The Royal Society Interface, 14(128), 20160867.